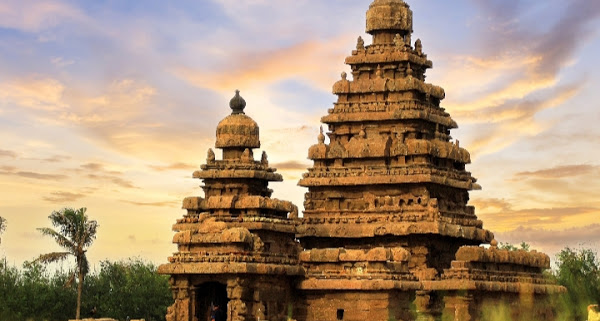 The gallery was not found!
Among the top 10 world heritage sites of Tamilnadu, Mahabalipuram ranks first. The temple is a combination of Pallaya and Dravidian style architecture. As the architecture is exemplary, it gained the fervor to be the most iconic UNESCO world heritage site in South India. The temple is built during the 7-8th century AD by King Narsimha Varma. Interiors and exteriors of this temple have been carved and sculptured elaborately, which is distinct in its architecture and stands the test of times. The architecture is the display of artistic excellence and creativity of the artisans. The main temple is dedicated to Lord Shiva is made up of Granite, and is a five-storeyed structure. The temple is of pyramidal structure and is 60 feet high and sits on a 50 feet square platform. Shiva Linga is kept in the sanctum sanctorum. At the rear end, there are two shrines facing each other. One two shrines are to Ksatriyasimnesvara and Lord Vishnu, which are facing each other. Lord Vishnu is carved as reclining on the serpent ‘Seshanag’, which symbolizes consciousness.
This temple is not used as a place of worship, instead of as a monument of art and the symbology of architecture. It is one of the cultural heritage sites of Unesco in India. The main festival commemorated here is the dance festival, which happens once a year during the months of January and February. Dancers around the world would gather in this temple to pay tribute to the God of Dance, Lord Shiva.