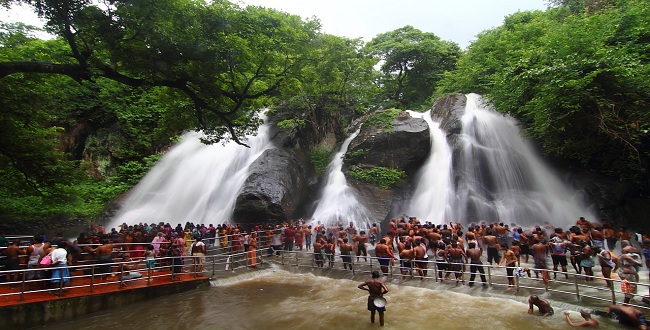 Courtallam season started!!!Courtallam is a cascading area which has a ubiquitous source of medicinal characteristics around it because it is located in the Western Ghats at the mean elevation of 160 m (520 ft) in Tirunelveli district, Tamilnadu. Courtallam will have received enormous tourists to visit, mostly in the south-west and south-east monsoon season, in these seasons, Courtallam would have good rain in the forest that become arriving as more water in the waterfalls.

Courtallam renowned place for the touristers over worldwide. Courtallam have earned the name called “spa of south India” having the number of health resorts surrounded in Courtallam. This waterfall zone is the source of perennial rivers like Chittar River, Manimutharu, Pachaiyar and Thamirabarani which is a treat to touristers when the area experiences substantial rainfall.

The closest towns to Courtallam are Sengottai and Tenkasi at 5 km (3.1 mi) respectively.

Thiru Kutrala Nathar Temple is the oldest and one of the 14 Sivasthalams of the Pandya Kingdom which is one of the highlights. 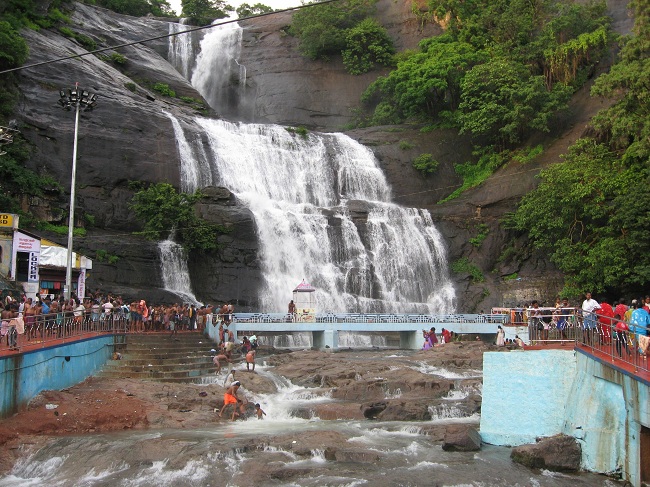 The Main Falls or Peraruvi is the most popular and the biggest among the nine falls. It is located right inside Courtallam town; water falling from a height of 60 m. Water falling is not only exists during the season but also in off season (November to January). Near to this fall, Sri Thirukutralanathar (Shiva) and Kuzhalvaimozhi Amman (Goddess) is located. The temple has inscriptions about Chola and Pandya Kings. Chitra Sabhai nearby exhibits paintings from the Puranas and is believed to be one among the five Sabhas where Lord Nataraja is said to have presented his cosmic dance.

Chittaruvi is situated just above the Main Falls. There are steps which provide easy access to the fall. Also, there are facilities for men and women to bath separately here. Tickets are required to enter the area. Shenbaga (Chembakadevi) fall Chembakadevi falls is situated on the way to Honey Falls and ( 3km) uphill trek on the main falls is need to reach Chembakadevi Fall, it takes about 1 hour to reach. Shenbagadevi temple is located near the falls so only it got the name Chembakadevi falls. Shenbaga flowers also famous in this temple, vendors selling the flower on the way to the temple. 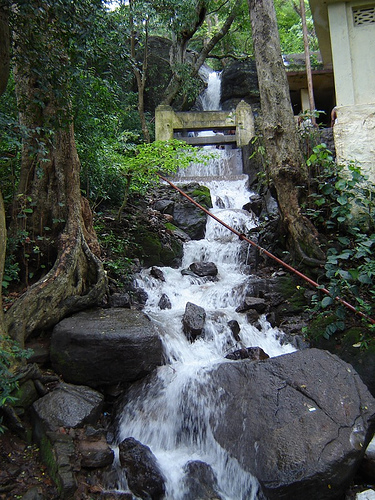 Thenaruvi is situated 4kms apart from the Main falls and is named because the beehives that forms on the face of the rock during the dry season. It is a horseshoe-shaped waterfall which falls vertically from three sides the view of the rainforests looks rock formations, the waterfall is not easily accessible and people are not allowed to bath in the falls as it is very dangerous. It takes 2 hours to trek in the forest. 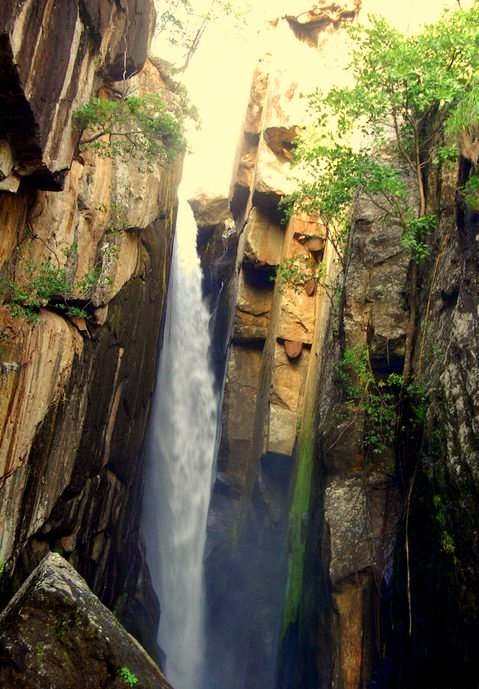 Puli Aruvi is Situated around 2 km from Courtallam bus stand, it is a small waterfall with a Sastha Temple and a bathing ghat are available for pilgrims, nearby. It is the safest place to enjoy. 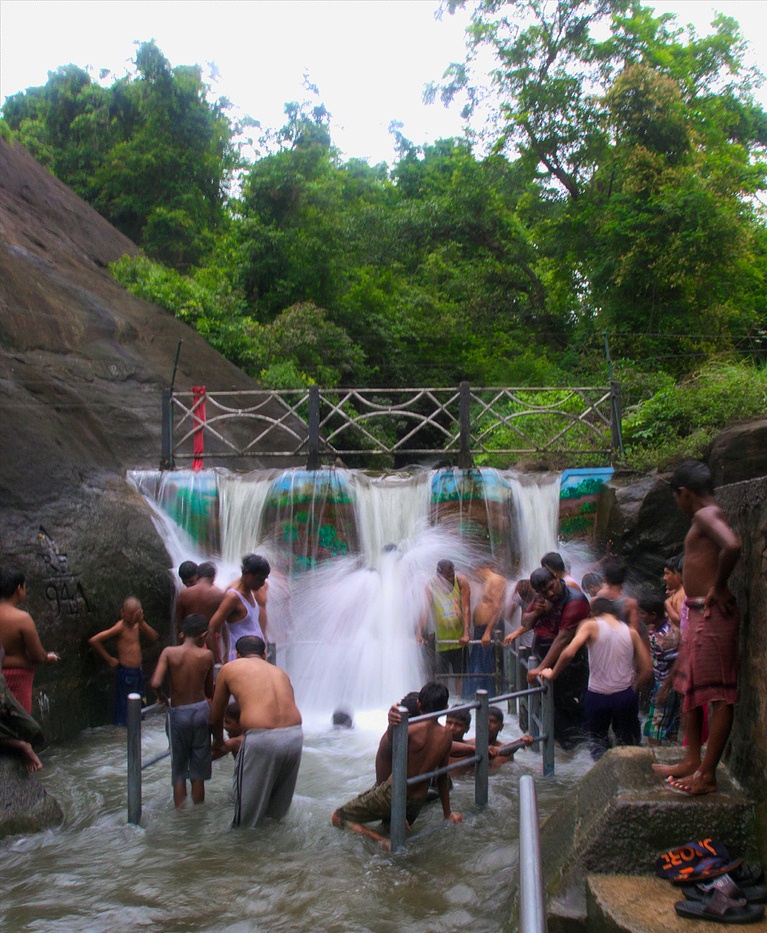 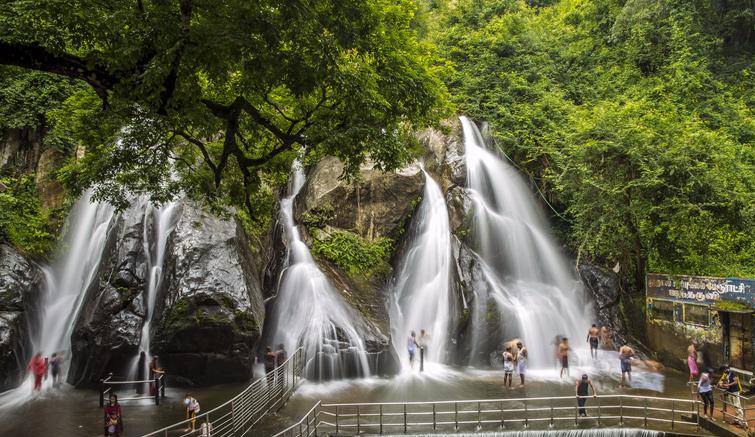 Aintharuvi is situated around 4 km away from Courtallam, Five falls is the most beautiful waterfall at Courtallam. As the name suggests, this falls separately into five sections before cascading down.

Pazhaya Courtallam has Situated 10 km from the center of the town, along the road to Tenkasi, is the Old Falls has 200 ft. It is comparatively less crowded here, especially late at night. There are facilities for oil massages, and men and women have areas to bath separately. 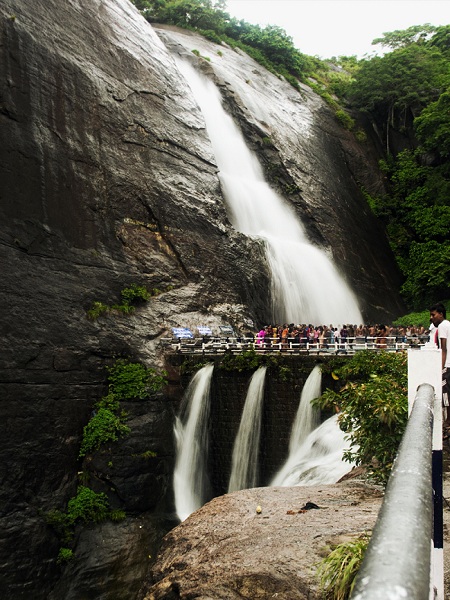 Distance of Courtallam to major cities:

Flight: Tuticorin Airport (TCR) located at a distance of 86 km

Rail: The nearest station is Tirunelveli, at a distance of 52 kms from Courtallam.

Road: Frequent state transport Services are available to various Destinations of the District and State.